Whiplash is a generic term applied to injuries of the neck caused when the neck is suddenly and/or violently jolted in one direction and then another, creating a whiplike movement. Whiplash is most commonly seen in people involved in motor vehicle accidents, but it can also occur from falls, sports injuries, work injuries, and
other incidents.

Most whiplash injuries are associated with forward and backward movement of the head and neck on the shoulders. Side-impact crashes, in which a person's head is turned, may result in side-to-side or even oblique whiplash-style injuries to the neck.

Although severe whiplash injuries can result in paralysis and even death, most such injuries are relatively mild.

What structures are injured in a whiplash?
Whiplash injuries most often result in sprain-strain of the neck. The ligaments that help support, protect, and restrict excessive movement of the vertebrae are torn, which is called a sprain. The joints in the back of the spine, called the facet joints, are covered by ligaments called facet capsules, which seem to be particularly susceptible to whiplash injury.

In addition, the muscles and tendons are strained- stretched beyond their normal limits. The discs between the vertebrae, which are essentially ligaments, can be torn, potentially causing a disc herniation. The nerve roots between the vertebrae may also be stretched and become
inflamed. Even though it is very rare, vertebrae can be fractured and/or dislocated in a whiplash injury.

What are the common signs and symptoms of whiplash?
Approximately two thirds of people involved in motor vehicle accidents develop symptoms of whiplash. Interestingly, the violence of the crash is not a definitive indicator of pain or even the amount of pain. Generally speaking, however, those involved in more severe accidents have more signs and symptoms. Another important and interesting aspect of whiplash is that the signs and symptoms often do not develop until 2 to 48 hours after the injury. This scenario is relatively
common but not completely understood. Some speculate that it may be due to delayed muscle soreness, a condition seen in other circumstances.

The most common symptoms of whiplash are pain and stiffness in the neck. These symptoms are generally found in the areas that are "whiplashed." For example, during a whiplash, first the head is lifted up from the upper-cervical spine. This creates a sprain/strain in the region just below the skull, where symptoms usually occur. Symptoms may also commonly be seen in the front and back of the neck. Turning the head often makes the pain and discomfort worse.

Headache, especially at the base of the skull, is also a common symptom, seen in more than two thirds of patients. These headaches may be one-sided (unilateral) or experienced on both sides (bilateral). In addition, the pain and stiffness may extend down into the shoulders and arms, upper back, and even the upper chest. 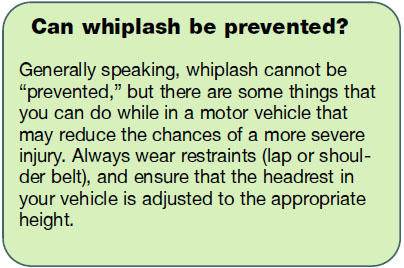 In addition to the musculoskeletal symptoms, some patients also experience dizziness, difficulty swallowing, nausea, and even blurred vision after a whiplash injury. While these symptoms are disconcerting, in most cases, they disappear within a relatively short time. If they persist, it is very important to inform your doctor that they are not resolving. Vertigo (the sensation of the room spinning) and ringing in the ears may also be seen. In addition, some patients may feel pain in the jaw. Others will even complain of irritability, fatigue, and difficulty concentrating. These symptoms also resolve quickly in most cases. In rare cases, symptoms can persist for weeks, months, or even years.

How is whiplash diagnosed?
To make a diagnosis, a thorough history of the injury and the patient's previous medical history are taken. Preexisting conditions, such as arthritis and/or previous injury, may increase the severity of the signs and symptoms of whiplash. Following history-taking, an in-depth physical examination, with concentration on the neuromusculoskeletal system, is performed. When appropriate, X-rays of the neck may be taken. If the doctor suspects that the soft tissues (for example, discs or ligaments) in the neck are injured, more advanced imaging studies, such as magnetic resonance imaging (MRI), may be ordered.

How is whiplash treated?

Staying active
One of the most important aspects of whiplash management is for the patient to stay active, unless there is some serious injury that requires immobilization. Patients should not be afraid to move and be active, within reason. In addition, your doctor will often prescribe an exercise or stretching program. It is particularly important to follow this program as prescribed, so that you can achieve the best long-term benefits.

Soft-cervical collar
The use of a soft-cervical collar remains controversial. Some suggest that such devices are inappropriate, as they act as a "crutch" and encourage a patient to avoid activity. Others suggest that, with proper counseling, a collar can help a patient slowly return to normal activities. There is no controversy, however, when discussing the length of time that a soft collar should be worn-no more than one week.

Chiropractic manipulation and physical therapy
Ice and/or heat are often used to help control pain and reduce the muscle spasm that results from whiplash injuries. Other physical therapy modalities, such as electrical stimulation and/or ultrasound, may provide some short-term relief. They should not, however, replace an active-care program of exercise and stretching. Spinal manipulation and/or mobilization provided by a
chiropractor can also give relief in many cases of neck pain.

Surgery and injections
Surgery, injections, and other invasive options are rarely necessary but are available, when appropriate. They are generally reserved for patients with more severe injuries to the discs, vertebrae, and nerves in the neck region.