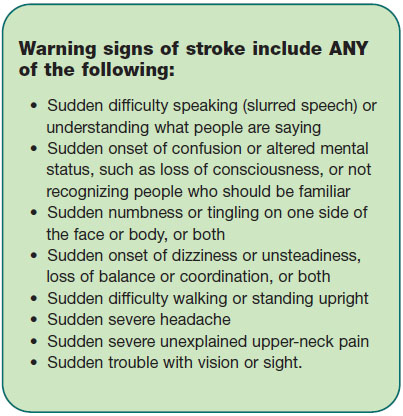 Although most people who suffer strokes are older, stroke can occur at any age. Especially prone to stroke are people with unhealthy lifestyles-those who smoke, stick to poor diets, and don't exercise. Stroke is also
associated with people who suffer from obesity, high blood pressure, heart disease, alcohol abuse, diabetes, or have a family history of stroke or an abnormal heart
rhythm. African-Americans have a much higher incidence of stroke, as well. In the United States, strokes are the most common cause of disability and the third most common cause of death in adults.

What Is Stroke?
Stroke is caused by a lack of blood supply to a portion of the brain, which causes that portion to die within just a few minutes. This lack of blood supply, also known as ischemia, results in long-term neurological effects because the cells in the brain do not regenerate.

The outcome of stroke depends on the person's age, general health, the region of the brain affected by the stroke, the type of stroke, and the extent of the brain damage. Common long-term effects include difficulty speaking, poor memory, altered emotions, poor recognition of previously familiar objects and people, amnesia, deformities of the extremities, and difficulty with movement, including weakness and paralysis. The weakness and paralysis often affect one side of the body-usually opposite the stroke location. Some of the effects can be permanent, while others may resolve with time and treatment.

What Are the Warning Signs of Stroke?
Sometimes people experience a "pre-stroke"-a shortterm lack of blood supply to the brain, also called a transient ischemic attack. The loss of blood supply lasts from seconds to just a few minutes and does not result in permanent damage. This condition is often a precursor to a full-scale stroke, so any symptoms associated with it should be investigated immediately.

What Should I Do If I Have Any of the Symptoms?
If you, your friend, or a family member is having any symptoms, seek medical care immediately:
• Dial 911 or have someone take you or your friend to the nearest emergency room. Do NOT let the person with the symptoms drive or stay home.
• Try to remember the time of onset of your symptoms and what symptoms you're having. This information will help the treating doctors provide the best possible care for you.

Remember: The sooner you seek emergency medical assistance, the better the chances of minimizing the damage from a stroke. The person with the symptoms should seek medical care even if:
• Not all symptoms are present.
• The symptoms go away after a short time.
• He or she has the symptoms with no real pain.
• He or she denies the symptoms.

What Is the Treatment for Stroke?
There are generally three separate stages of treatment for stroke: prevention, therapy immediately after stroke, and post-stroke rehabilitation. Stroke prevention is based on treating underlying risk
factors (see tips below). Acute stroke therapies try to stop a stroke while it is happening. These include anticoagulants that help break up or prevent further formation of blood clots and efforts to support the person's vital functions, such as breathing. Post-stroke rehabilitation helps overcome some of the disabilities that result from the brain damage. For most stroke patients, physical therapy, occupational therapy, and speech therapy form the base of a rehabilitation program.

How Can I Reduce My Risk of a Stroke?
1. Stop smoking. In some people, smoking cessation can reduce the risk of a stroke to that of a non-smoker. Smoking causes damage to the blood vessels throughout the body. Some of the chemicals in tobacco smoke take the place of oxygen in the blood, increasing the likelihood of loss of blood supply to the brain.
2. Eat a healthy diet. Eat only sensible portions of foods. Avoid foods high in saturated and trans fats.
3. Keep your blood pressure under control.
4. Get regular physical examinations and follow your doctor's orders.

Is There Risk of Stroke from Neck Manipulation?
Neck manipulation is a remarkably safe procedure. Although some reports have associated upper high velocity neck manipulation with a certain kind of stroke, or vertebral artery dissection, there is not yet a clear understanding of the connection. While we don't know the actual incidence of stroke associated with high velocity upper neck manipulation, the occurrence does appear to be rare, based upon the clinical reports and scientific studies to date. The chiropractic profession is
actively researching stroke and neck manipulation and available safe alternative conservative therapies.

It has also been suggested, for example, that sudden severe upper-neck pain and/or headache, which may indicate a pre-stroke condition, could cause someone to visit a doctor of chiropractic. In addition, some regular everyday activities, such as stargazing, rapidly turning the head while driving, and even having a shampoo in a hair salon may cause aneurysm-a widening of an
artery resulting from the weakening of the artery walls- of the neck arteries, resulting in stroke. These events remain very difficult to predict.

If you are visiting your doctor of chiropractic with upper-neck pain or headache, be very specific about your symptoms, so that he or she can provide the safest and most effective treatment, even if it involves referral to another health care provider. There are various head and neck positions and forms of joint movement. Depending on your clinical condition, joint mobilization, therapeutic exercise, soft-tissue techniques, and other therapies can also be recommended. If the issue of stroke concerns you, do not hesitate to discuss it with your doctor of chiropractic.