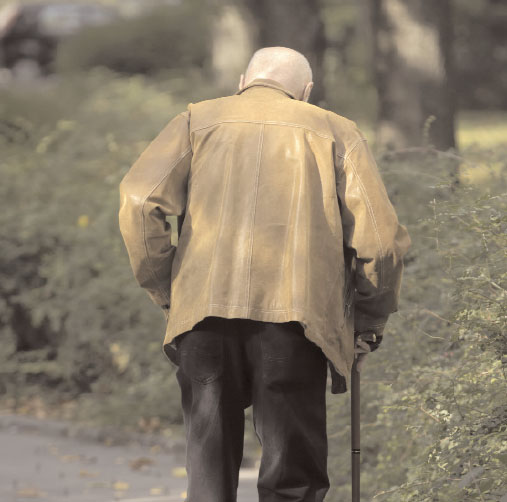 Patients with lumbar spinal stenosis-one of the most common reasons for spinal surgery in older people-are commonly recognized by a bent-forward, shuffling posture and a characteristic small-step gait. Stenosis surgery, however, is a major procedure that is recommended only when conservative methods of care aren't effective-

or when stenosis is caused by such things as tumors or accompanied by intolerable pain or severe
neurological problems, such as loss of bowel and bladder function.

What is stenosis?
Spinal stenosis is created by the narrowing of the spinal canal. This narrowing may be caused by mechanical problems or by abnormalities in the aging spine. It may or may not result in low-back pain, limping, and a lack of feeling in the legs.

Stenosis is often a degenerative condition. It may exist for years without causing pain or discomfort, but a fall or an accident can trigger characteristic stenotic pain. Numerous factors can cause stenosis, such as thickened ligaments, expanding infection, abscess, a congenital or developmental anomaly, degenerative changes, vertebral fractures or dislocations, or a spinal cord tumor.

Other conditions, such as a herniated disc, can mimic stenosis. While herniated discs usually cause rapid and acute muscle spasm, discomfort caused by stenosis builds gradually. Other conditions that can be confused with stenosis include vascular claudication, peripheral vascular disease, and abdominal aortic aneurysms.

Claudication-pain triggered by walking-caused by vascular disease most often occurs after walking a fixed distance. Patients with spinal stenosis, however, walk variable distances before symptoms set in. Activities like riding a bicycle and walking up a hill can cause pain in patients with vascular claudication, but not in those with stenosis. On the other hand, standing makes pain
worse for stenotic patients, while it relieves vascular claudication.

How is stenosis diagnosed?
Spinal stenosis can be diagnosed based on the history of symptoms, a physical examination, and imaging tests. An MRI is a very poor predictor of future disability in stenosis. An electrodiagnostic study is more dependable for information on a stenotic spine. To diagnose stenosis caused by an abscess or an infection, blood work analyzed by a laboratory may be required, while vertebral tumors and spinal tumors require finely tuned imaging.

Although degeneration is the most common cause of the condition, spinal stenosis can also result from long term steroid use. Degenerative stenosis also has multiple contributing factors, including disc degeneration, disc bulging, bone spur formation around the vertebrae and the facets, thickening of the soft tissues, and bulging around the disc. Some anatomical factors, such as the enlarged, weakened bones caused by Paget's disease, can complicate both the degenerative process and treatment.

How is stenosis treated?
There are three basic treatment approaches to spinal stenosis: the conservative medical approach, which frequently involves bed rest, analgesics, local heat, and muscle relaxants; the conservative chiropractic approach, which includes manipulation, exercise and self-care techniques; and surgery. The source of the
stenosis often dictates the treatment.

Although medications can provide pain relief, those powerful enough to deaden the pain can also exacerbate patients' already compromised sense of balance. When the patient loses bowel or bladder control, suffers from intolerable leg pain and claudication, and has progressive loss of function or spinal cord tumors, surgery is the first and only option. The standard stenosis surgical procedure usually involves opening up the spinal canal and decompressing the neural elements by
removing the bony structures that contribute to canal narrowing. Although many patients do fairly well after the surgery, the symptoms are likely to return after a period of time.

Recent studies show that although stenosis surgery will often have good results up to two years, in the long run, outcomes are much the same between surgery and conservative care. Some surgeries have to be repeated years later. Many are far from fully satisfactory. Surgery is a complicated procedure that irreversibly changes the structure of the back.

In many mild and moderate cases of stenosis, however, non-invasive conservative care, such as chiropractic, can help lessen pain and discomfort, maintain joint mobility, and allow the patient to keep a reasonable lifestyle, at least for some time.

A technique called distraction manipulation may be helpful in reducing leg discomfort. Home exercises are a major part of the conservative treatment program. Recommended four or five times a week, the exercises, such as bicycle riding or lying on the side and grasping the knees with the arms, focus on flexing the spine in a forward position-stretching and strengthening the lower back and stomach muscles and improving muscle strength. Exercises designed to mobilize the involved nerves have been found to be particularly helpful.

Ultimately, stenosis is a chronic condition that cannot be "cured," but it often can be improved, and improvement can be maintained over the long term. Patients can work with a health care provider, such as a doctor of chiropractic, to reduce symptoms and improve their quality of life.

Signs and Symptoms of Stenosis
• Pseudoclaudication-pain triggered by walking or prolonged standing, which is usually improved by sitting in a forward leaning flexed position
• Numbness, tingling, and hot or cold feelings in the legs
• Muscle weakness and spasms