Ever since 1984, the year soccer passed baseball as the most popular team sport in the United States, participation in this sport has skyrocketed. With increasing numbers of children running and kicking their way
down soccer fields across America, doctors of chiropractic are urging parents to learn how to protect their children from the potential injuries this popular sport can cause.

Although soccer can be a great overall sport for children, some youngsters are enduring mild to severe head traumas, neck injuries, damage to the cervical spine, headache, neck pain, dizziness, irritability, and insomnia as a result of their participation, according to the Journal of the American Chiropractic Association (JACA). Each year, in fact, youths under age 15 suffer more than 227,100 soccer-related injuries, according to recent reports.

Heading the Ball: A Risk for Children
"People have a misconception that soccer has no risk," says Scott Bautch, DC, past president of the American Chiropractic Association's (ACA) Council on Occupational Health, who has children currently playing soccer. "I think soccer is too aggressive too early, which is leading to potential problems. It's not as though we can fix brain damage later on in these kids' lives."

Soccer requires three basic skills - kicking (striking the ball with the feet), trapping (similar to catching the ball, only using different parts of the body), and heading the ball (the deliberate use of the head to redirect the ball). It's that last one - heading - that stirs concern and controversy over possible permanent damage.

Philip Santiago, DC, who was an All-American soccer player in college and a professional player for five years, says that heading is safe only when children are given "proper coaching in proper technique." Dr. Santiago has also served for five years as head soccer coach at both New York Institute of Technology and Montclair State University, and was the chiropractor for the United States Olympic Team in 1992.

Dr. Santiago's opinion on proper technique is backed up in a study of elite soccer players at the 1993 Olympic Festival. "While properly executed heading was not found to result in any concussive episodes, 18 percent (18 of 102) of the concussions were a result of heading," the study found.

Dr. Santiago would like to see youngsters hold off heading until age 10 or 11. Dr. Bautch prefers age 14 to 16, based on maturation and development of the spine.

Helmets: Not a Complete Solution
Some school districts are now requiring helmets for young soccer players. However, Dr. Bautch, who says helmets are "a positive," worries that helmets don't protect the spine and don't make up for too-aggressive play. "They are just a smal 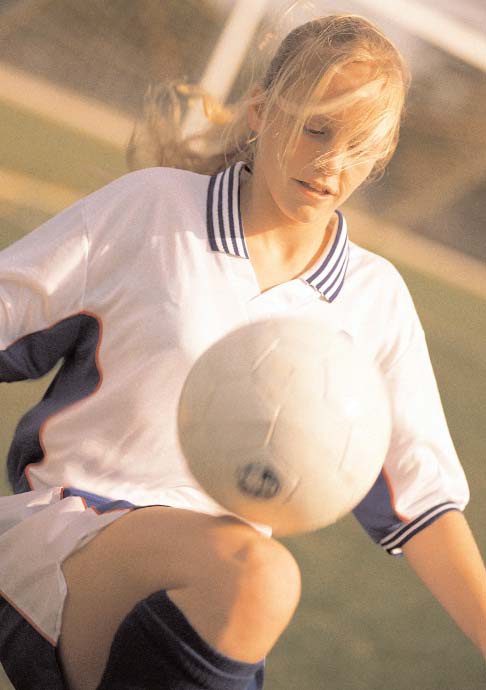 l piece that may give some protection," he explains. "I'd hate to see kids wear helmets and have people think that the kids are safe and that they don't have to teach safety and prevention. I would rather see no heading without helmets in young kids, and let helmets be introduced later."

Prevention and Treatment of Injuries
If an injury occurs, think RICE - rest, ice, compression, and elevation of the injury - which is the recommended procedure. Keep the injury iced until the swelling is
down, applying ice no longer than a 20-minute session.
After 20 minutes, ice fatigues the blood vessels and causes a heat reaction that actually increases swelling. Leave the ice off for about an hour and reapply. Then, try to get the child to move the injured area
as soon as possible. If pain persists, consider taking your child to a chiropractor or other health care professional.

Other Safety Recommendations
Parents can help protect their children from soccer injuries. Many of the participants at a recent Consumer Product Safety Commission roundtable insisted that parents and coaches already have the tools at their disposal. Among them are:
• teaching and use of proper heading technique
• use of smaller balls for younger players
• strict enforcement of rules
• padding of goal posts
• use of mouth guards
• improved medical coverage at games
• coaches educated in symptoms of brain injury
• proper nutrition, including plenty of water to keep muscles hydrated
Parents should also encourage a broad spectrum of sports - like soccer, skating and skiing, for example - to develop the whole body. Over-playing and overtraining are problems exacerbated by ambitious parents, peer pressure and adult role models. Children need their rest time.