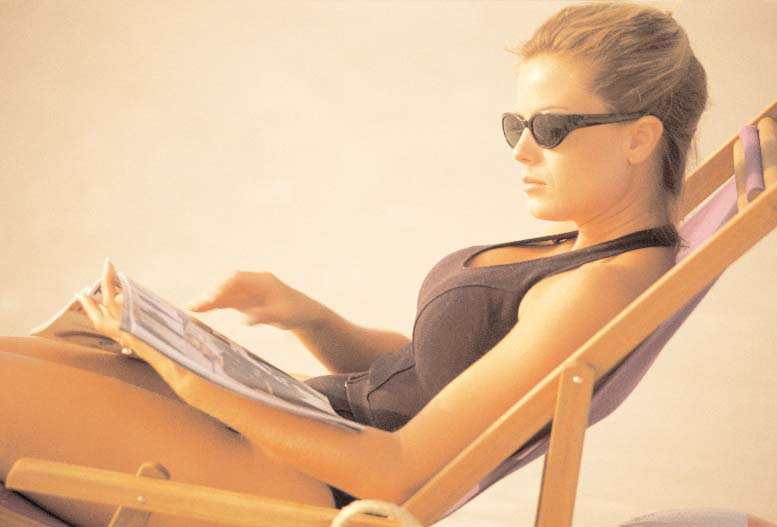 Each year, about a million Americans learn that they have skin cancer-the most common type of cancer in the United States. Approximately 40-50% of Americans who live to age 65 will have skin cancer at least once in their lifetimes. The risk is greatest for people who have fair skin that freckles easily-often those with red or
blond hair and blue or light-colored eyes-although everyone can develop skin cancer.

Skin cancer is also related to lifetime exposure to UV radiation. Most commonly, it appears after the age of 50, but the sun's damaging effects begin at an early age. Therefore, protection should start in childhood to prevent skin cancer later in life.

What Is Skin Cancer?
The skin is the body's largest organ, weighing about 6 pounds. It protects us against heat, light, injury, and infection; helps to regulate our body temperature; and stores water, fat, and vitamin D. Cancer (malignant tumor) is the out-of-control division of abnormal cells in the body. These cells can then invade nearby tissues and spread through the bloodstream and lymphatic
system to other parts of the body.

What Are the Symptoms of Skin Cancer?
The most common warning sign is a change on the skin-especially a new growth or a sore that doesn't heal. A change in the size, shape or color of a mole can be a symptom of a melanoma. All three carcinomas are found mainly on areas of the skin that are exposed to the sun-the head, face, neck, shoulders, hands, and arms-but can occur anywhere.

Rough, red or brown scaly patches on the skin, also called actinic keratoses, can sometimes develop into squamous cell cancer. The patches usually appear on sun-exposed areas, but can be found elsewhere on the body.

Skin cancers do not all look the same. Some may start as a small, shiny, smooth, waxy or pale lump. Others can appear as a firm red lump. Sometimes, the lump bleeds or develops a crust. Skin cancer can also start as a flat, red spot that is rough, dry, or scaly. Not all changes in the skin are sure signs of cancer, but if a skin symptom lasts longer than 2 weeks, see a doctor. In most cases, skin cancers are not painful, so don't wait for the spot to hurt.

The cure rate for skin cancer could be 100 percent if all skin cancers were brought to a doctor's attention before they had a chance to spread. However, once a cancer is allowed to spread, the effects can be fatal.

To identify skin cancer early on:
• Check yourself regularly for changes in the skin. Promptly report any new, colored growths
or any changes in growths to your doctor.
• Check your skin in a well-lit room using a mirror after a shower or bath.
• Learn where your birthmarks, moles, and blemishes are, and what they usually look like.
• Check for changes in the size, texture, or color of mole, or a sore that does not heal.

During a skin self-examination, evaluate the entire surface of the skin carefully, especially the following areas:
• The front, back, left and right sides of your body.
• Palms and forearms, including the under sides and the upper portions of your arms.
• The back and front of your legs.
• Feet, including the soles and the spaces between the toes.
• Face, neck and scalp. Use a comb or a hair dryer to move hair so that you can see these areas more easily.

How Is Skin Cancer Treated?
Surgery can get rid of many skin cancers quickly and easily. In fact, the cancer is sometimes completely removed at the time of the biopsy, and no further treatment is needed. In some cases, doctors suggest radiation therapy, chemotherapy or a combination. Even though most skin cancers are cured, the disease can recur in the same place or elsewhere on the skin. People who have been treated for skin cancer should examine themselves regularly, visit a doctor for regular
checkups, and follow the doctor's instructions on how to reduce the risk of redevelopment.

How Can I Prevent Skin Cancer?
Whenever possible, avoid exposure to the midday sun, from 10 a.m. to 4 p.m., the peak hours for harmful UV radiation. Wear protective clothing with long sleeves as well as a hat to help block the sun's harmful UV rays.

Lotions that contain sunscreens can also protect the skin. These lotions are rated in strength
according to the sun protection factor, which ranges from 2 to 30 or more. Those rated 15 to 30 block most of the sun's harmful rays. But do not assume that because you are wearing sunscreen,
it's "safe" to spend endless hours in the sun. Water can wash it off, as can sweat.